The sun beamed bright, the day a delight as our yoga storytelling adventure began. Our plans included a stop off in Ruston for peaches. Ruston is north Louisiana's peach paradise and the season had just opened. Mitcham Farms is just peachy, it has a delightful gift shop with all sort of peach goodies and fresh peaches galore. Millions of peaches...peaches for me! After a few sweet purchases we lapped up some peach ice cream before shoving off for Richland Parish. 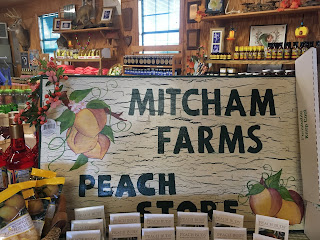 Richland parish is the home of Louisiana's first public library. Who would have known? It was built in 1927, the year of the great flood. Stories are told of people who paddled their pirogues into town to borrow books until the water receded. A sturdy, red brick building it is still is use as a memorial library. 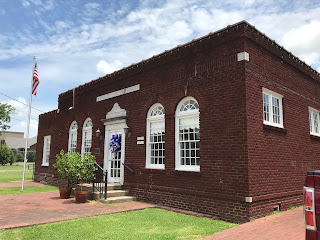 Good girl scouts always scout out their territory so we google mapped the addresses for the branches we were to visit and set out to locate them ahead of time. Gotta be prepared ya know, don't want to get lost or be late. Well...the printed map and the mobile map got us lost, and if we would have waited til morning we would've definitely been late! The first library was just up the road from where we were staying but the map took us this way and that way to no avail. Putting the maps aside we allowed intuition to guide us and found it easy peasy just around the bend.

We can't say enough about the librarians we worked with. They were incredibly welcoming, thank you Debbie, Amanda and Sara! Richland parish is rural, it has two branch libraries each one about a 20-minute drive from the main library in Rayville. The libraries have recently been handsomely renovated and it was wonderful to see the communities utilizing them. Libraries Rock!

Four presentations were scheduled, two each day. Each session the kids sat enchanted as we told The Impossible Dream. Introducing kids to yoga is exciting as well as rewarding, you never know what you're gonna get. One of our participants had a leg in a cast and was on crutches. Did it stop him? No way! Which only reminded us...Nothing is Impossible! 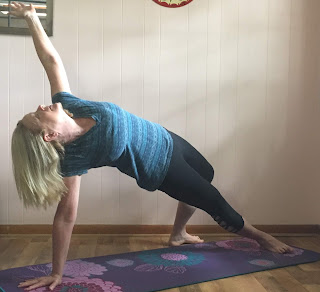 Joy comes naturally during the easy times of life, but it takes effort to find moments of happiness during the hard ones. Life has many trials and tribulations, but we can experience joy throughout if we keep in mind that hardships do ultimately dissipate. Growing up any time I was sad or frustrated my Mom would tell me, "this too shall pass", and this did seem to help somewhat because it gave me hope that things would eventually get better. I still think of those words today whenever I am feeling down.

One way to find happiness during difficult times is to be grateful for all the good that you have. Recognize the abundance and blessings in your life, even in the midst of the difficulties by appreciating the things that you have and not taking things for granted. It may be simple as appreciating having a roof over your head and food in the cabinet. Writing down what you are grateful for expands the process. Keep a gratitude journal and write in it every night before bed or maybe once a week. You might even want to write down your troubles. Let enough time pass before rereading what you wrote in your journal and you could discover there was a reason for the difficulty and it may even have been a blessing in disguise.

Another way to find happiness during difficult times is to live in the moment. There are moments of joy in even the most painful times of life. You could be having a troubling day but look up to see a magnificent sunset or a glorious flock of birds flying overhead. Let the beauty of the scene transport you to another plane of existence where troubles do not lie. Which brings me to a third way of finding happiness, embracing nature. Two of the most profound places of peace are the forest and the ocean. If you can go to a forest and breathe deeply, letting the oxygen fill your lungs it can instantly bring a peaceful feeling. Just being among the trees can uplift and energize you. Take a walk on the beach and open up your senses to feel the sand between your toes, listen to the waves and smell the salty air. Merely doing this has a way of renewing us and bringing comfort.

Last but not least, moving your body can transform your experience. Take a walk preferably in nature, through the woods or on the beach, in a park or even around your block. Turn on some music and dance. And you probably know what I'm going to say next...try doing some yoga. Doing yoga moves energy through meridians in our body that can remove negativity. Sometime we may cry while the negative energy moves through us, but then we can release it rather than holding onto it, allowing room for joy. Try it next time you are feeling low.

Our story this month; May I be filled with joy.

We found joy in our practice this month as we practiced Wild Thing. If you would like to give Wild Thing a try the instructions are as follows:

From Down Dog come into Side Plank on your right side. Step your left foot behind you, keep your right leg straight and push your hips up away from the floor. Scoop your tailbone and use your legs to keep lifting your hips. Curl your head back, lift your left side body, and keep your left upper arm moving toward your shoulder socket. Extend your left arm overhead and curve into a rapturous backbend. Have fun. Be wild. Taste your freedom. Then release, step back to Down Dog and switch sides.

Kathe and Melanie
The tales of two little library mice who discovered quantum theory and began to express themselves through story and yoga. We are sisters, born and raised in the heat and humidity of the south where we still reside. We love gentle ocean breezes and the cool crisp air of the mountains and escape whenever an opportunity arises. Influenced by many styles of yoga we always return to our Hatha home.